By Finepitch -  Sat Aug 10, 2019 7:29 am
-  Sat Aug 10, 2019 7:29 am #84680
Hi All...
I've built a new competition Bullet engine for my RE based scrambler but I'm unable to kick start it.
In short, the engine is a mix of Indian and British made parts. A Redditch case, 612 cc via a Hitchcock crank and a new old stock 'big head', ported and polished. 5 speed box. I have measured the comp. ration to be 11.3:1, about where I wanted it, a dash higher than planned maybe. I have 100LL Avgas in the tank.
The problem seems to be that the flywheel does not have enough energy to take the piston over TDC against the compression. My starting routine has always been to bring the piston up towards TDC on the comp. stroke, decompress, nudge the piston on a little more, bring the kick start back up and give it a jolly good kick. I'm pretty fit and strong, I feel that I can kick an engine pretty hard if needs be. The kick start lever runs out of stroke before the piston reaches the next comp. stroke although the flywheel caries the piston over and off it goes. Now with the new high compression engine, the piston just bounces off the compression.
My mate towed me on the bike with the Land Rover to see if the engine was fundamentally ok. It starts relatively easily provided the back wheel doesn't lock and although carb tuning is needed, it's a really fierce engine, sounds great and picks up the front wheel with little effort. These first short tests seems to show it has the grunt I was looking for. This is not a road bike...!
So, given that Land Rover tow-starts are a dash inconvenient, does anyone here have experience with high compression Bullet engines and the starting of? Is there a technique that I'm missing? Is there a known max. comp. ratio that can be kicked?
Thoughts are welcome.... R. 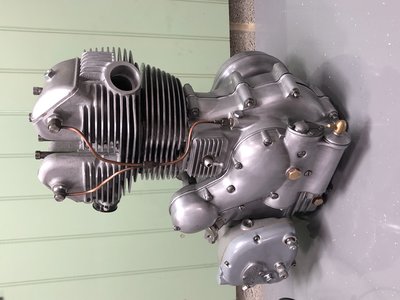 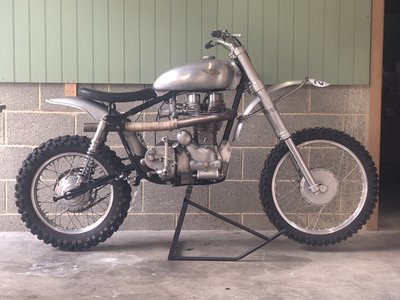 In my capacity as a bit of a racing snake, I still found Slo Poke difficult to start so Paul retarded the inlet cam, by one tooth – which can also add a little performance.

He also made a neat little partial decompressor allowing one to partially decompress the engine, start it, and then just flip a little lever to achieve full compression.

In terms of starting technique, I no longer use the partial decompressor but, instead, I get the piston to TDC and then stand on the kickstart lever until it’s at between twenty minutes and twenty five minutes to (as per a clock) and – having allowed the lever return to the top – give the lever a long swing through.

Yesterday morning, I started Slo Poke, after a 3 week break, and he started second kick.

By Finepitch -  Sun Aug 11, 2019 8:51 am
-  Sun Aug 11, 2019 8:51 am #84701
Thank you very much for this advice. The partial decompressor looks like a very clever idea indeed. I'll get in touch with Paul about it. I have a feeling that I'm going to have to reduce the compression ratio although it's worth a shot to see if the partial decompressor works for my set up. At the moment, I can stand on the kick start lever on compression, bounce up and down and it's solid.

By Blown265 -  Sun Aug 11, 2019 10:53 am
-  Sun Aug 11, 2019 10:53 am #84702
Hello mate
I have 10.7:1 in mine and use the #90023 cams- kickstarting is doable, but not for the feint hearted. (I'm a middleweight boxer FWIW)
Those cams have a late IVC so that helps, but I wouldn't retard them much further though (certainly not a full gear tooth). If you are running #90023, then you could consider Hs' keyed timing pinion and retard both I&E. It may reduce the trapped compression a little, and will move the rpm range a few hundred rpm higher.
Also, without wishing to state the obvious or be disrespectful, your modified advance curve must be correct. Neither sore feet or missing power are good outcomes.
Kind regards
Paul

I have no problem kicking my 612 into life, kick it just over TDC using the decomp, close the decomp, kickstart to the top of it's stroke and KICK. More often that not it will start first kick.

At the risk of teaching you to suck eggs - the kiskstart is fully returning to the top of it's stroke isnt it?
Previous bikes - far too many !!

I find my biggest problem on my 612 is a trendancy for the bike to change itself into first when kicked over hard. That said, while mine is closer to 10:1 than 11:1, I don't find much of an issue starting it in the standard way as you described.

stinkwheel wrote: ↑
Sun Aug 11, 2019 12:39 pm
Have you lowered the primary drive ratio too? That might explain the lack of "throw" you're experiencing? Sounds like the clutch is in pretty good order though. What are you using in that respect?

I find my biggest problem on my 612 is a trendancy for the bike to change itself into first when kicked over hard. That said, while mine is closer to 10:1 than 11:1, I don't find much of an issue starting it in the standard way as you described.

Guess this was aimed at "finepitch" but for the record mine has a Bob Newby clutch and works really well - not a hint of slipping.

As I say starts 1st or 2nd Kick hot or cold I did run it for a while without the compression plate but could not stop it pinking but never had any starting issues.
Previous bikes - far too many !!