I thought we could open another one about breathers

As some of you know my breathers run open
the crank breather runs to the chain via a duckbill
the rocker box runs back through a open pipe
My Harley runs open breathers from the rocker boxes
I have no problem with emulsion in either engine
I like a engine to breath to the atmosphere not sucking oil, water, carbon, etc back in

That's how mine run how about yours 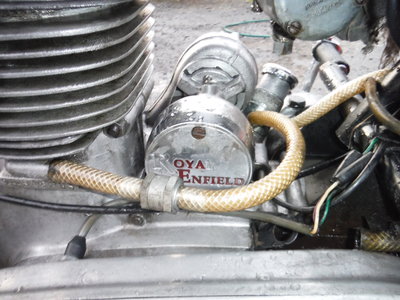 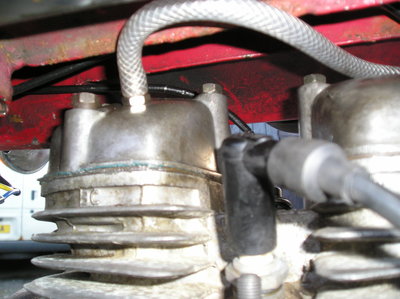 By Adrian -  Sat Jan 11, 2020 6:46 pm
-  Sat Jan 11, 2020 6:46 pm #87219
Just for you, Dai, I was running this set-up on ASBO12 for a while. In theory the repro drip feed oiler serving a a catch can could also have served as a chain lubricator too. It had to come off as the polycarbonate "glass" bowl reacted to the breather fumes from the engine and went cloudy, I was also unable to stop it leaking. As I later bought a proper glass replacement and a new gasket for it, it may yet go back on, though for now the bike has one of our hosts' breather tower/filler neck extension thingies. 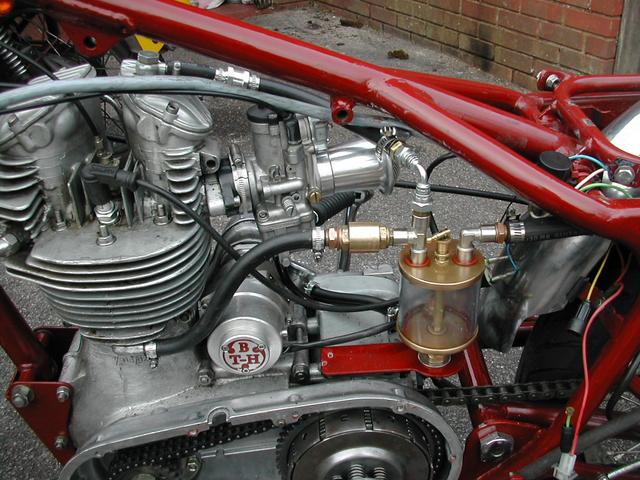 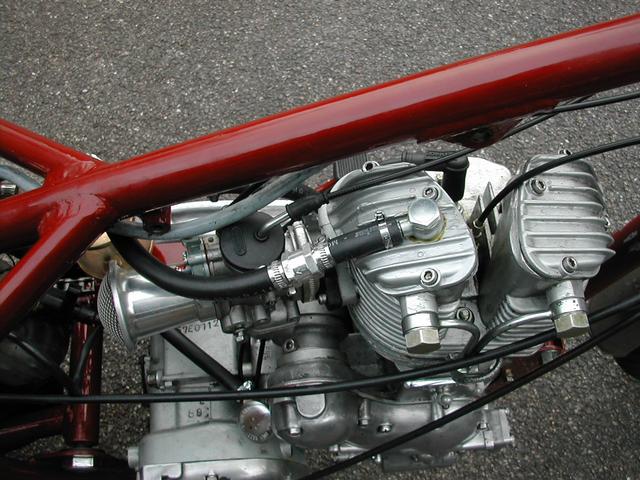 By Daiwiskers -  Sat Jan 11, 2020 7:13 pm
-  Sat Jan 11, 2020 7:13 pm #87220
Not just for me
I thought we could use this thread as a reference as to what works and what doesn't
What's worth spending on and what's not
As you all know I'm no expert on Enfields but have a pretty good mechanical background
Here's hoping we can save some people unwarranted expense
Thanks for then interest Dai
Dyslexic sorry folks can't help that
Owner of asbo 30

Even after replacing it with a straight duckbill, it still clogged and needed clearing every 300 miles or so (blowing through into a paper towel every other fuel stop), even after averaging 150miles of daily use for 3 months. The emulsion problem disappeared entirely when I fitted one of our hosts scavenge bypass valves. I have no idea why.

I still felt it wasn't breathing properly so went the whole hog and drilled a hole in the crankcase! Drilled and tapped it and fitted a nipple. 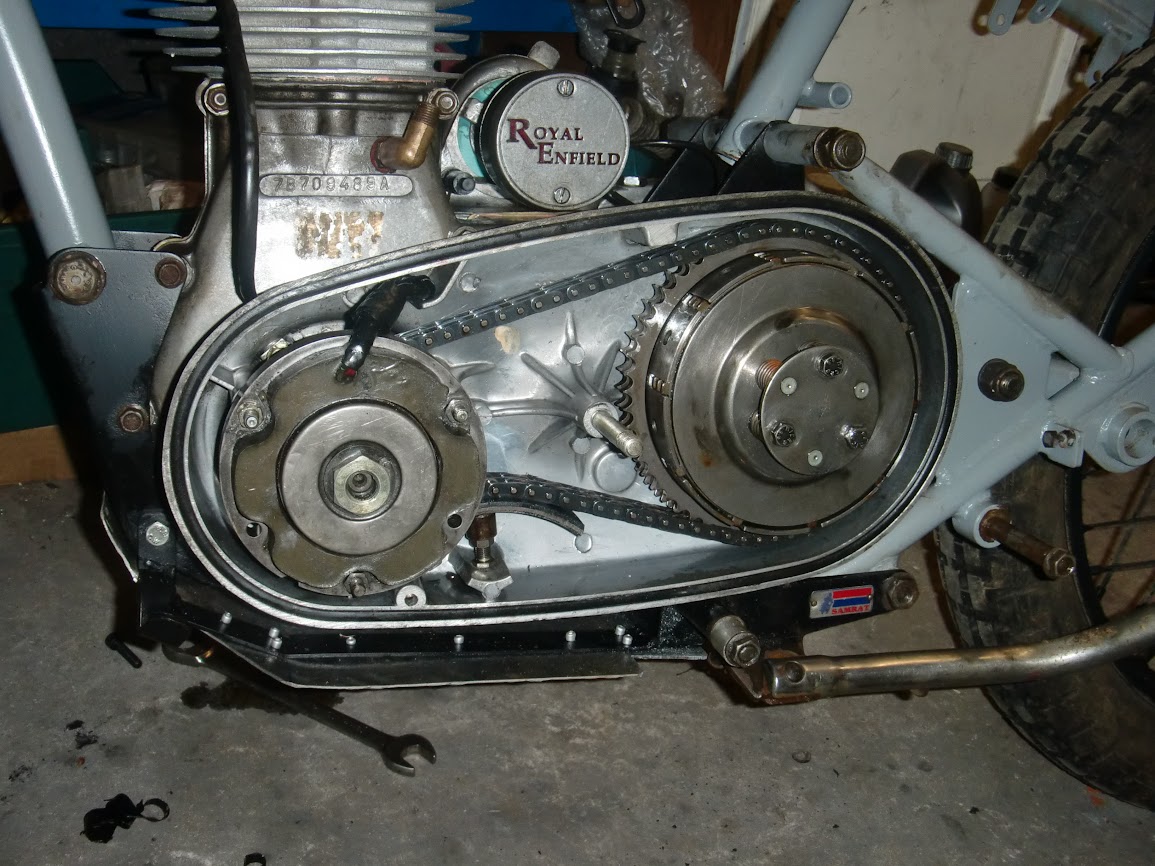 I also did a bit of a quick and dirty experiment to measure the volume of gas it breathed out with the various confugurations (including with and without the oil tank vented). Basically by seeing how quickly it would displace 750ml of gas (a wine bottle).

My own thought is that venting through the oil tank is inherantly unhelpful and effectively a bodge to make late models pass emissions tests. The "modification" is essentially a 4mm hole drilled between the crankcase and oil tank. It looks like it's been done with a pistol drill at the factory . 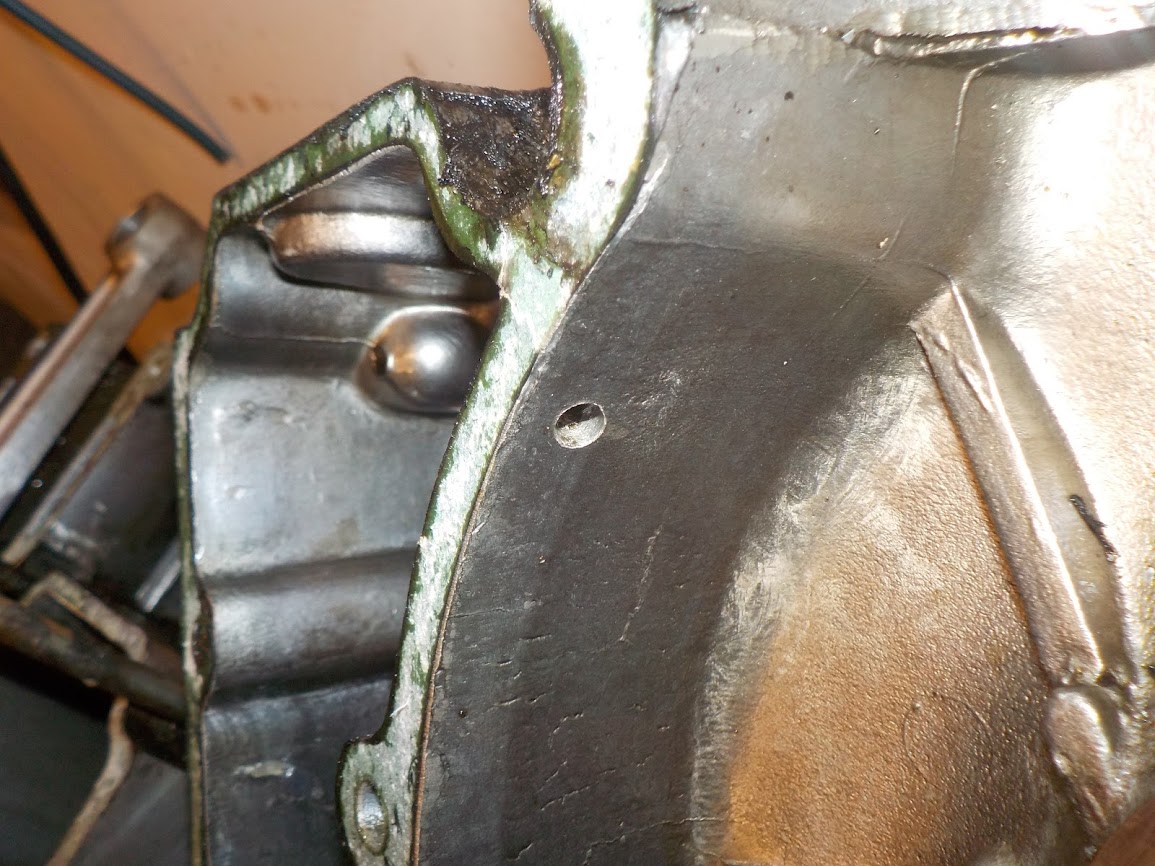 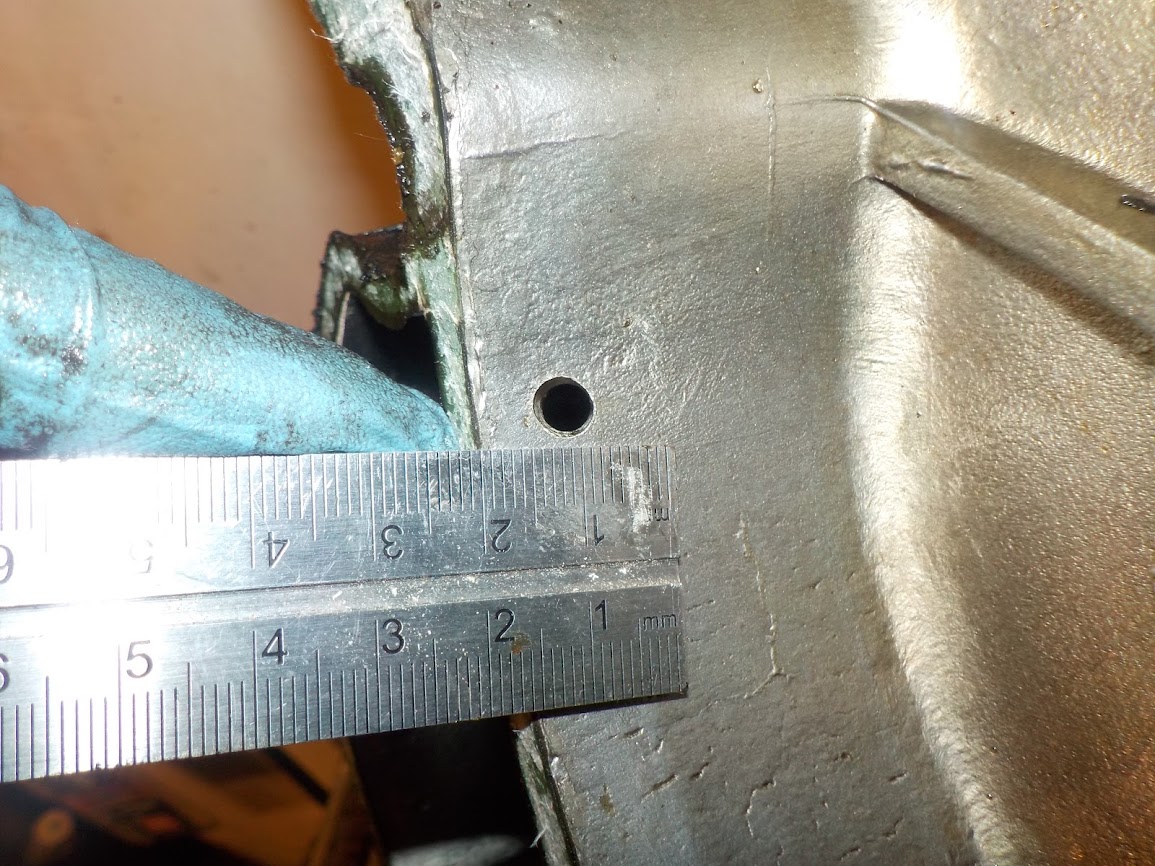 I have blocked this hole off on both my bikes by tapping and inserting a tapered-threaded bolt from the oil tank side and re-instated a crankcase breather (using the above hole on my 350 and by having the blank breather stub drilled out on my 2004 612). 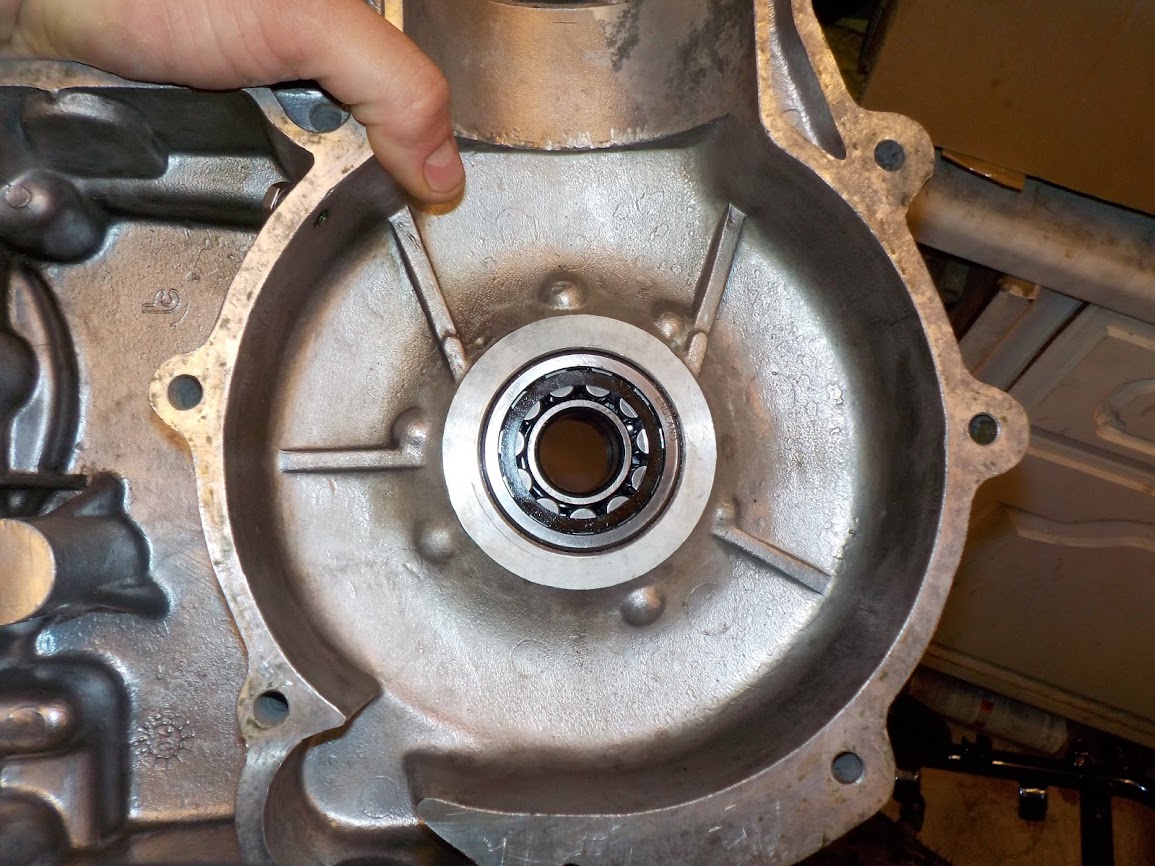 My 350 has a stub on the timing chest (originally for the "return" from the catch-can) which I am going to try both blanked and open. I suspect it will act as a breather for the rocker area with which it has a direct connection. If this works, I'll fit a similar breather stub in the blanking plate I fitted to the 612 to cover the hole left by removing the distributor.

By Adrian -  Mon Jan 13, 2020 11:24 am
-  Mon Jan 13, 2020 11:24 am #87253
We might want to blame RE India for messing with a previously good design, but Redditch Bullets also had a breather vent between the crankcase and oil tank, a shallow slot milled in the top of the section of casting separating the two, on the timing side. Here's a handy photo of it, courtesy of Bullet Whisperer. 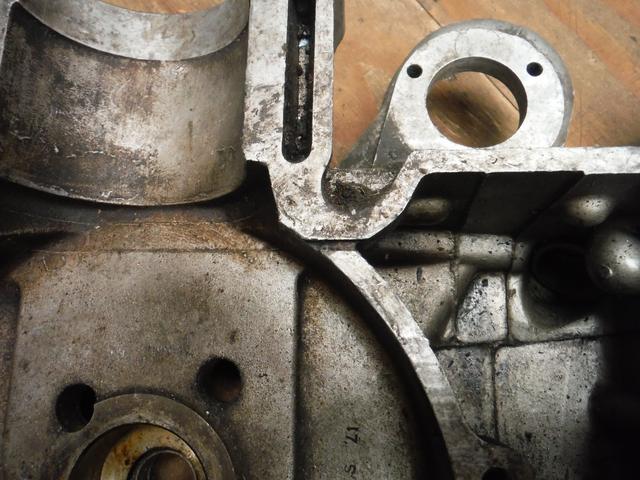 My current project engine uses an earlier set of cases still with a functional breather stub and a smaller version of the same hole as in your crankcases, which I guess was the Chennai factory's attempt to replicate the Redditch arrangement. I countersunk this so that I could plug it with a 2BA countersunk brass screw and a nut on the oil tank side, but after seeing the above photo I thought it might be wise to allow some breathing between the two, so I managed to drill a small hole through the centre of the 2BA screw.

Apart from that the plan is to run the breather pipe via a non return valve to one of our hosts' contraptions, but with extra oil tank vents which will be piped into the air filter. These will be needed as I have modified the timing side oil tank to take a sight level tube. This is open at the top, and I don't want a pressurised oil tank pumping its contents out all over my right leg . Yes, I have now found a P clip the correct size. 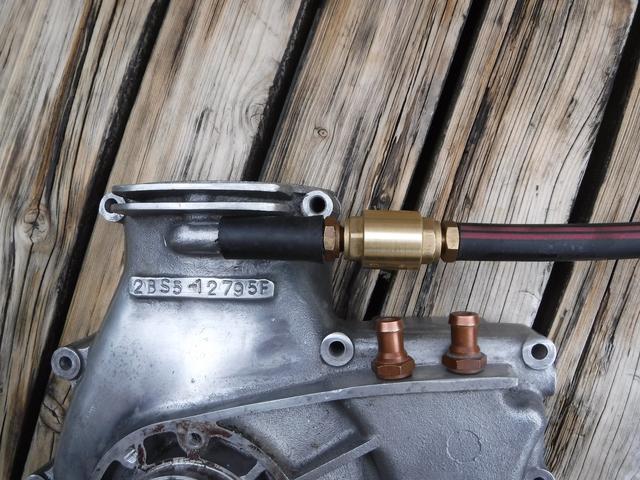 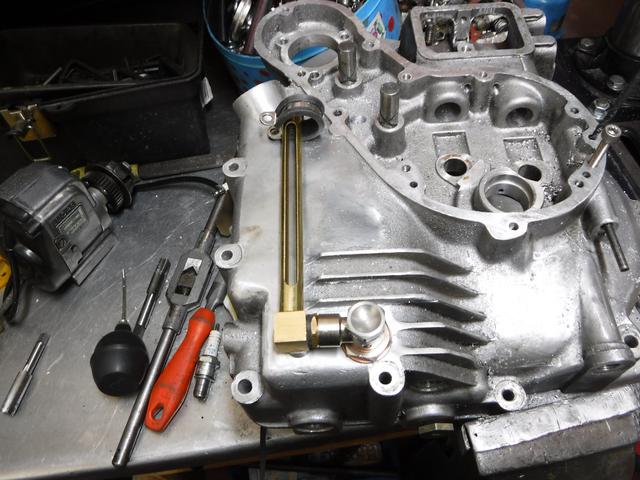 By Daiwiskers -  Mon Jan 13, 2020 12:05 pm
-  Mon Jan 13, 2020 12:05 pm #87256
That's a interesting video
Have to admit that it's got me a bit puzzled?
Now obviously the piston will compress the air in the crankcase on the down stroke but surely the air can expand again on the up stroke (I think?) and balance the pressure
The breather should take care of any excess pressure by venting to catch can or atmosphere
Obviously Royal Enfield are struggling with the emissions so I can understand why they run the breather to a catch can and drain it back to the oil tank and hopefully vent the gasses to the air filter box
But why the drilling from the crank case to the oil tank? All I can see that doing is over pressuring (spelling) the whole system (no wonder the sealed catch can system causes problems!)

Do the unit engine's suffer from the same problems?

I wonder if we will ever get to the bottom of this? Dai
Dyslexic sorry folks can't help that
Owner of asbo 30

Just had another thought

Could the oil tank being pressurised cause the timing case to flood and that be the cause of the wet sumping that these engines suffer from?
Dyslexic sorry folks can't help that
Owner of asbo 30