By Robbo622 -  Thu Oct 10, 2019 11:39 am
-  Thu Oct 10, 2019 11:39 am #85969
After three years I’m selling my Electra. It’s done 8200 miles of which I’ve done just under 6000. The bike came to me with our host’s stage one upgrade, Amal mk 1 concentric carburetor, through flow down pipe and goldie loudener. The PAV plumbing has been removed. I have modified the oil breather system so only the main crankcase breather remains, re-routed to the catch can which drains over the chain.
Stainless braided hose fitted to front disc.
An upgraded TCI unit was fitted also wider bars and our host’s softer rear springs fitted to the shocks.
The sprag clutch destroyed itself so the remains were removed along with the starter motor and the resulting hole blanked off.
Henry Price ‘R’cams have seen fitted, the inlet Cam being retarded one cog and new tappets and adjusters fitted. As a result the next to useless decompressor system was removed.
I have replaced the far too loud goldie silencer with a Burgess style one from Armour's, a nice thump, decent performance which doesn’t scare the horses.
I never managed to get the Amal carburetor to idle happily without stalling at traffic lights so I’ve fitted a 32 mm JRC flat slide which seems to perform faultlessly.
I’ve serviced the bike myself in accordance with the Royal Enfield Service Manual except the engine oil with is changed twice a year.
The bad bits:
Scratches on the tank (see photos), both side decors are missing, Our host’s haven’t had the right side in stock since I’ve owned the bike. I have the tool kit which sits behind one of the missing decors.
The tyres (Avon) are good, the rear changed last year. Drive chain replaced at the same time.
The result of all this is a bike that starts easily (first kick when warm, 2 or 3 from cold), is sprightly (for an Enfield) the ‘R’cams allowing it to rev more freely, and is happy to cruise at an indicated 70 mph. Fuel economy about 65 mpg .
I’ve gone as far as I can with this bike which I’d love to keep, but funds needed for the next project as she who must be obeyed only tolerates one bike at a time….
The full asking price will include:
Service Manual
MRA screen
Amal mk 1 carburetor, original UCAL carburetor
Goldie and a short megaphone silencer.
Original cams.
A couple of special tools, tappet guide puller and cam pinion extractor. 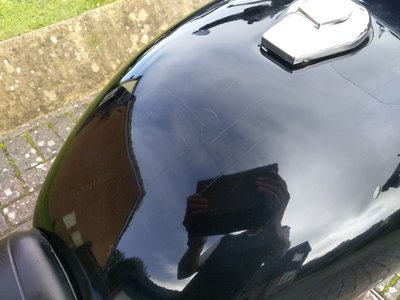 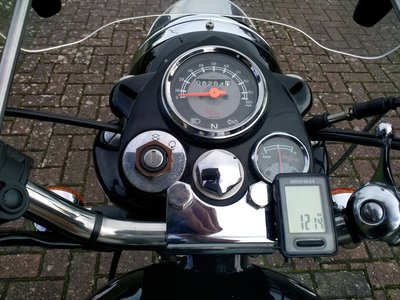 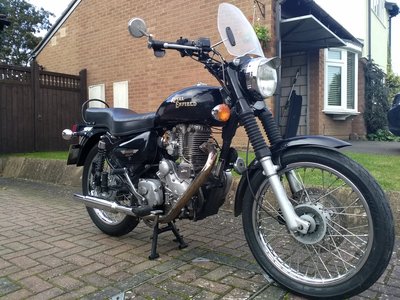