The ride home was mainly motorway which is not what I intent to use the bike for however it did highlight two things. First was a surprise, a lot of buffeting. Probably the worst I have experienced on any motorcycle. Second was to be expected at sustained 65mph / 70mph my personal opinion was it seemed to be working a little harder than I would like. Other than these I was happy with my decision. I know some find the brakes to be a little weak however I find them perfectly fine.

After a few searches I decided to order a 16 tooth front sprocket. My bike is standard with no mods and I am very happy with the decision to fit the 16 tooth sprocket. I did not notice much of a difference in acceleration but it certainly is sitting at lower RPM on higher speeds. During fitting this I decided to remove and clean the chain. I had also came across a couple of videos showing dry / poorly greased bearings which had failed due to no grease. I thought I would take a look. The bike has 3000 miles. On inspection the rear axle / wheel bearings were fairly dry. I then removed the rear shock linkage which again had very very little grease. I then decided to remove the swing arm completely and again the swing arm bearings were the same. I cleaned and greased all bearings with high quality grease. I would recommend owners to inspect there bearings if they are doing any maintenance. I am aware of the issue with poorly greased head stock bearings a I intend to inspect same when I am doing my next bit of service work. Which will be an oil change and a valve check. Any advice on these is very welcome.

The screen. Again I contemplated purchasing a taller / touring screen but on past experience I was afraid I would still have buffeting and also have to look through a tall screen. Many have mentioned removing the screen completely to see how improved the airflow is. I dont like the idea of not having a screen so I decided to cut down the original screen. My thinking was if It doesn't improve the buffeting or if I mess it up I can always purchase the touring screen. I removed 4 inches of screen and shaped it back to as close to the original top as I could. Overall a massive improvement for me. Much much quieter with less buffeting. If anyone has the same issue I would definitely recommend it.

Any advice on the misting within the speedometer. Were these ever recalled or replaced by dealers. I may buy a used speedometer to experiment with fixing this as I don't want to damage the original.

Just to mention if you are reading this and considering purchasing a Himalayan. I would 100% recommend the bike. These are minor niggles which are very easily cured with very little expense.

By Trev -  Tue Apr 13, 2021 5:55 pm
-  Tue Apr 13, 2021 5:55 pm #96325
Thanks for posting. I bought a Himmy middle of last year (only a few months old with less than 200 miles on the clock) and would echo what you've said on most of those points. I've actually ordered a short screen from our hosts but am thinking I would be better off cutting own the original, hey ho, I'll see. Having ridden dozen of bikes over 40+ years, most, apart from sportsbikes, without screens or fairings I've never really understood the need to bolt screens on slow bikes.

Gearbox sprocket mod I also agree, very worthwhile and does not seem to affect performance.

4500 miles up on mine, and bought from new, great all round bike.

Keep on enjoying !!
Previous bikes - far too many !!

Buffeting isn't just screen. It can be exacerbated by type of helmet, jacket, height...

Anyway, up until two years ago, I would said it was very personal and down to the bike and rider to resolve. I now think the set up I have would work for you.

I had a slightly taller screen on my Translp which wasn't great and then under someone's recommendation, fitted what you see below. It worked beautifully. Strangely the deflector needs to be vertical to work perfectly!

My Transalp was written off in december and I transferred the deflector to my, new to me, F650GS. It works exactly the same as the Transalp; perfection.

I must stress that it works perfectly for me....

But, as the deflector was an eBay jobbie at £14, it was worth the gamble; a gamble that paid off. 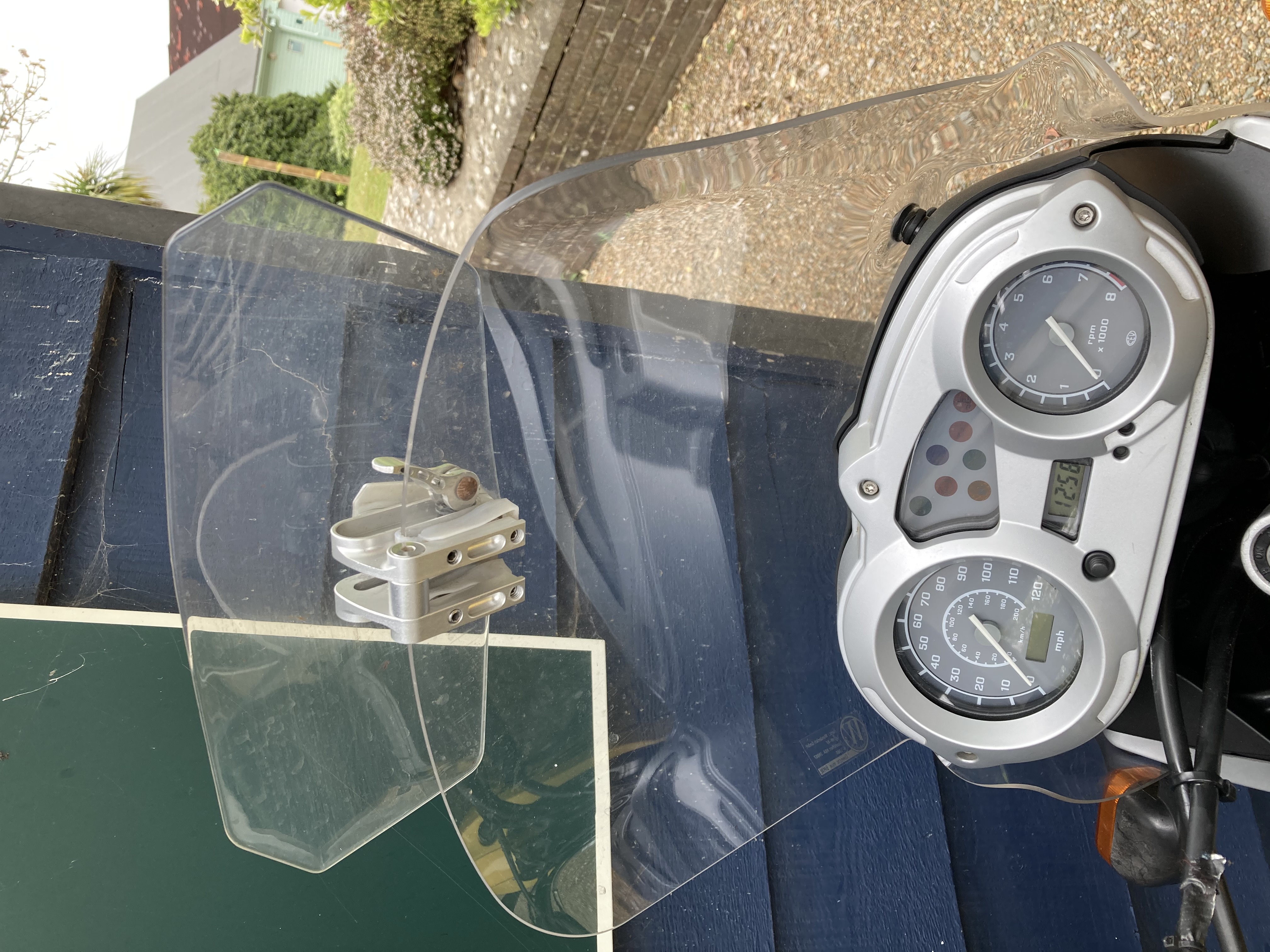 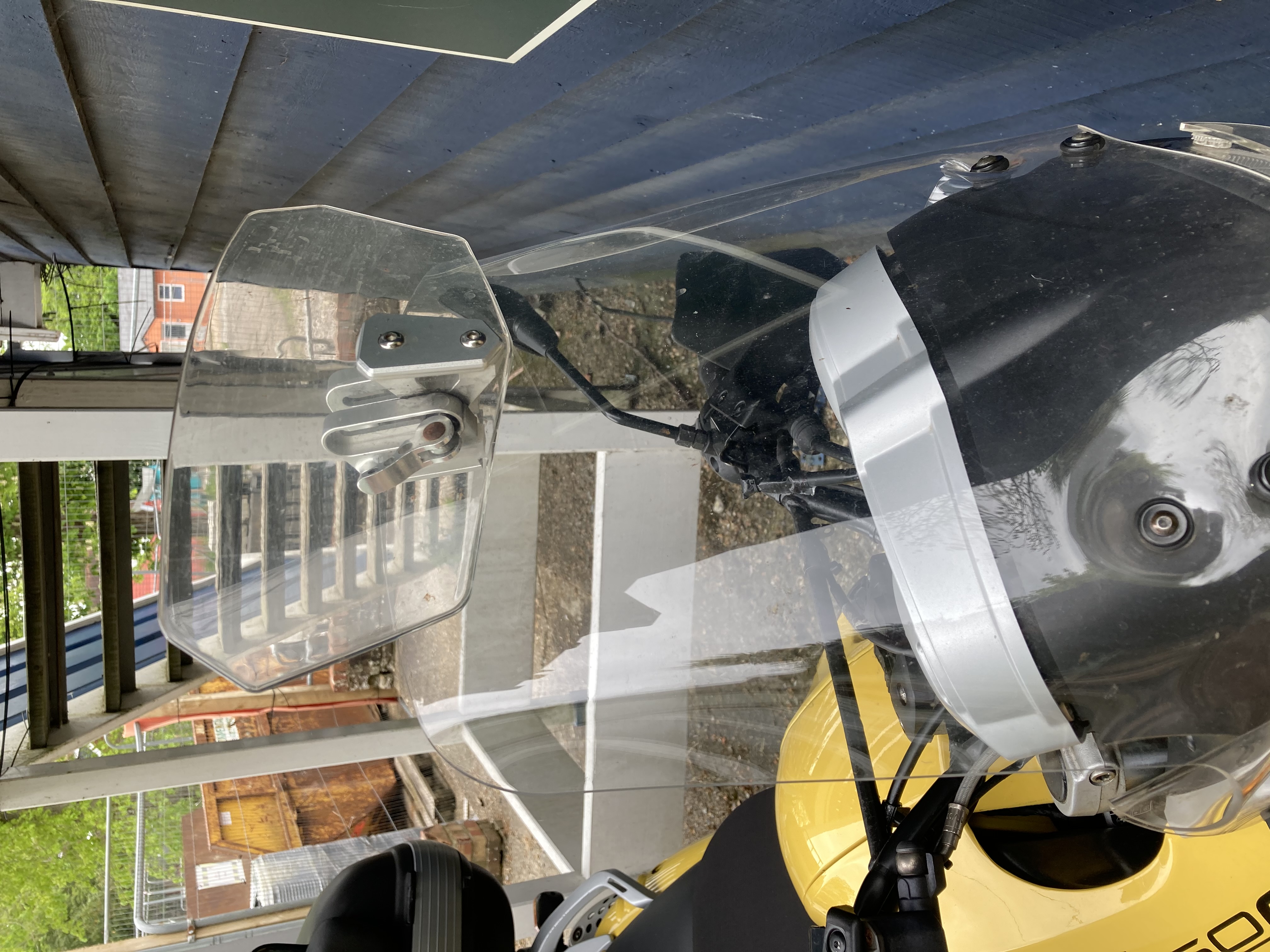