By weedsy -  Sat Jun 29, 2019 9:55 am
-  Sat Jun 29, 2019 9:55 am #83804
Does anyone know if this switch would originally operate from "off" in two directions, clockwise and anticlockwise? It will turn one click in each direction; both seem to activate the ignition circuit. A previous owner has fitted a second set of new coils under the seat, leaving the originals in the toolbox, and I am unsure if this switch is part of that modification, i.e. to be able to use either set of coils in case of a failure. As I don't have a complete wiring diagram of this mod, it would help to know whether the switch has also been replaced, or whether the original had this 2-way switching arrangement, and why? (I assume key/lock barrel numbers are not part of factory records?)

By Adrian -  Sat Jun 29, 2019 11:03 am
-  Sat Jun 29, 2019 11:03 am #83805
Not sure about the Trailblazer/Super Meteor system, but certainly some Lucas 6V alternator systems had a 2 nd emergency start position which fed unregulated alternator current directly to the coil when the bike was kicked over, the idea being that as soon as the engine fired up you had to switch it back immediately to the normal "on" position. My old BSA C15 had this one, is yours the same? By weedsy -  Sun Jun 30, 2019 2:28 pm
-  Sun Jun 30, 2019 2:28 pm #83842
Hi Vince - this bike has two coils in the toolbox, and two under the seat; amongst the previous owners' copious notes he mentions "fitted 2 new 6v coils (L. & R.) under the seat, keeping existing coils in toolbox with duplicate wiring". There is a later comment some time later "ignition coils hot?" followed by "fitted new voltage regulator box".
From my car days, I remember that on a 12v system, a ballast resistor and 6v coil produced a monster spark at start-up, and was switched out automatically after starting. Or would the system simply energise 2 6v coils instead of one 12v???
I found a standard wiring diagram, but as you see from the above - they're not much use!
Thanks for your help and any further ideas - maybe he just appropriated the "emergency" position to feed the duplicate coils? (PS The bike starts and runs fine in either position, I'd just like to know what's going on . . . )

By weedsy -  Sun Jun 30, 2019 2:40 pm
-  Sun Jun 30, 2019 2:40 pm #83843
Hi Adrian - I can only see the switch barrel in the box lid; I will check for any markings on the switch casing inside. It has a number identical in size and type to 60's cars, but simply 3 numbers, no letter prefix as in MG's, for instance. The bike is 12v (would have been 6v originally?)
As you may have noticed (!) I am illiterate in matters Enfield, and know little about electrics - other than that they're smoke-powered. Once you let the smoke out, they don't work any more . . .
I have found in our host's catalogue, a small circular switch backplate that indicates an "emergency" position left of centre, so maybe this sat behind my switch once?

By Adrian -  Sun Jun 30, 2019 6:19 pm
-  Sun Jun 30, 2019 6:19 pm #83844
Your bike would have been 6V originally, factory 12V systems didn't come in on British bikes until the mid sixties onwards. If it has been converted to 12V the emergency start thing is redundant as the alternator is wired to give full output all the time, with rectifier/regulator unit (or zener diode if it's an older conversion) sorting out any excess charge. The idea was that even with a flat battery there would be enough juice coming from the alternator at a healthy cranking speed via the kickstarter for the engine to start.

What a previous owner has done with the electrics sounds hopelessly over-complicated - vince's comment that It would have one coil and a distributor reflects what the factory would have fitted if there was no magneto, much simpler. So an a 12V system the ignition switch now only has to be an on/off switch.

If you haven't already read it, Zelda's topic "Re-wire required! 12v Super Meteor wiring diagram needed" might be of interest.

The switch backplate you found sounds like the one my BSA had fitted.

By weedsy -  Mon Jul 01, 2019 7:14 am
-  Mon Jul 01, 2019 7:14 am #83850
Thanks, Adrian - armed with this information, I'll peer inside the box and dissect the wiring to see if the switch does in fact re-route the juice to the second set of coils - it does indeed sound over-complicated - or just too lazy to strip out the old coils? Maybe the overheating coils he mentioned in the box were the motive for fitting the second set under the seat - more airflow than in the toolbox? But why the twin coils in the first place? I'll search the paperwork again, and if I find anything of interest, I'll post. Thanks again. 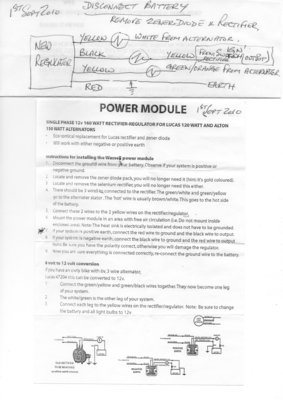 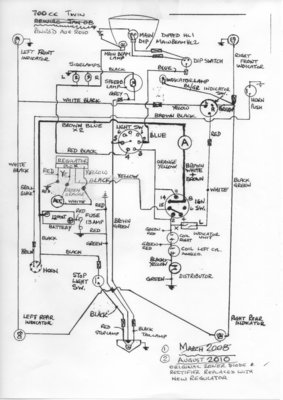 By Meteortatty -  Mon Jul 01, 2019 10:22 am
-  Mon Jul 01, 2019 10:22 am #83853
There may be slight confusion over "coils". The coils referred to here are not ignition coils; they are windings in the alternator stator. The idea was that if one had a flat battery the user could switch to "emergency" position on the ignition switch which would direct 2 of the coils' electrical output generated by kickstarting directly to the ignition coil. This would be enough to get the engine to fire up. Once fired up the rider would switch to the normal on position and then the circuit would allow the flow of electricity through the rectifier and into the battery which would recharge the battery.
These coils in the stator are hidden by encapsulating resin in later stators, but are visible on Indian stators and on any Lucas stator up to the mid sixties. (Or the Hitchcock's parts diagrams.)