Any tips would be greatly appreciated as would information on THE CORRECT grades of oils gearbox/engine/forks as looking through the "workshop manual" confuses the issue as printed page states use sae grade oils and spec pages say a straight 20/50 with Hitchcock's stating that they use a semi synthetic 20/50. Don't know how long oil has been in bike so want to do oil change hoping that this will help.

Also any one know if Haynes ever did a workshop manual - I find the Indian one lacks a lot of strip down information.

If you take the outside cover off the gearbox (don't worry, there's no oil in it), you'll see something like this, hopefully a lot cleaner than mine.: 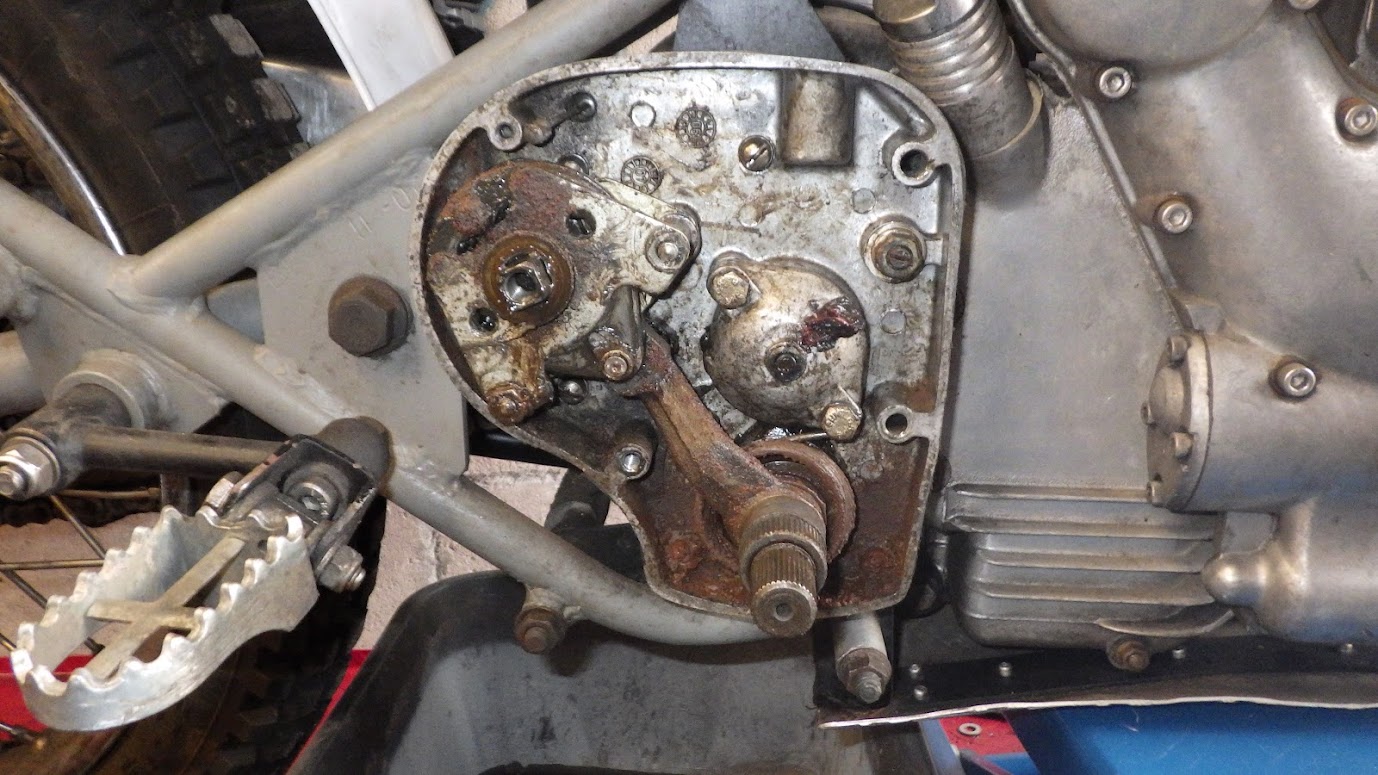 You don't actually need to take the top plate off to adjust the gear selection but here's what it would look like if you did: 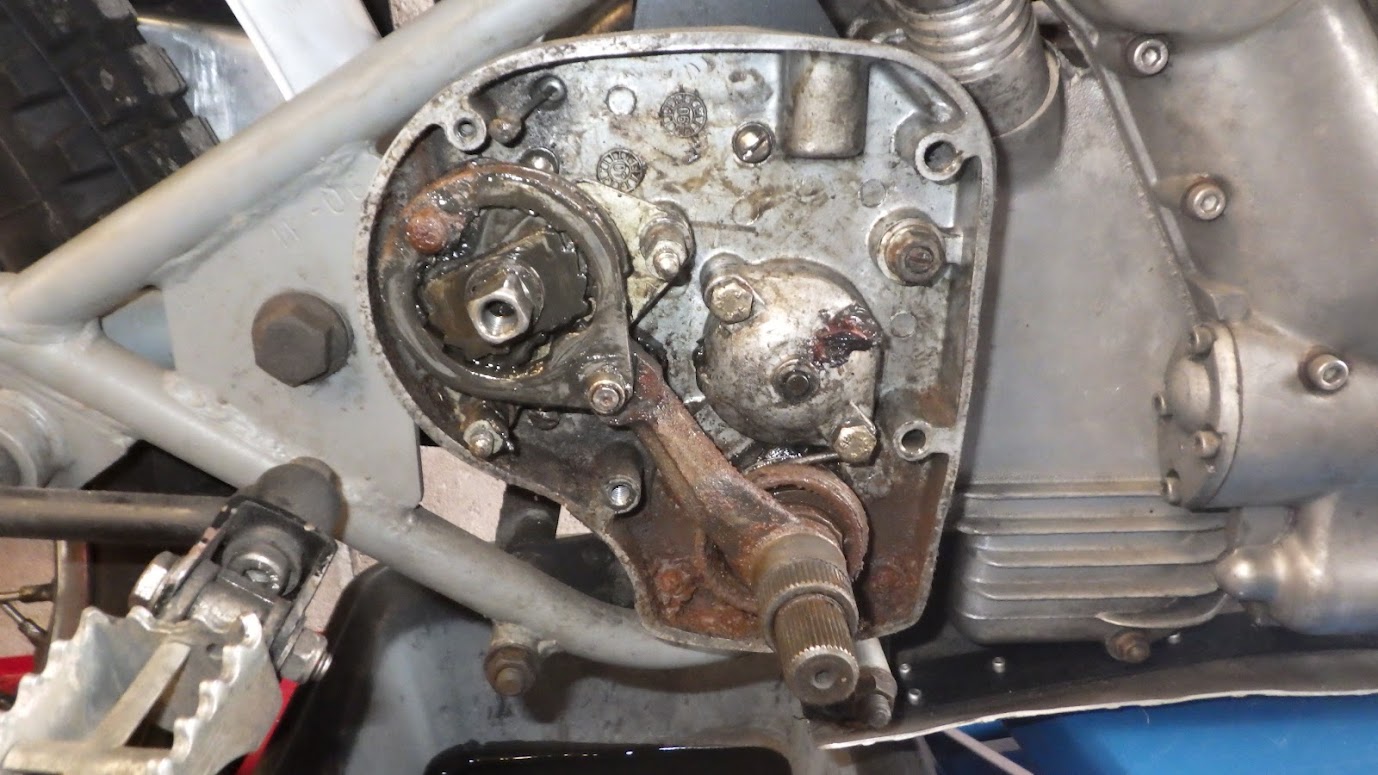 That whole assembly is mounted on slotted holes and you can move it one way and the other to adjust the point it catches the gears. There's a sweet-spot where it will change both up and down and many points where it will only do one or the other.

The way I do it is to re-attach the gear shift lever. Loosen but not remove the two nuts holding the top plate on the selector mechanism then loosen the two "posts" that the top plate is held down onto. I then move the gear shift lever so it's roughly in the middle of its travel (with the posts loosened, this moves the entire assembly on the slotted holes rather than moving the gear selector mechanism). I hold the lever in that place and and tighten down the posts again. Then see if it'll shift both ways.

From that point, I tweak it one way and the other until I hit that sweet spot where it engages up and down shifts equally well. 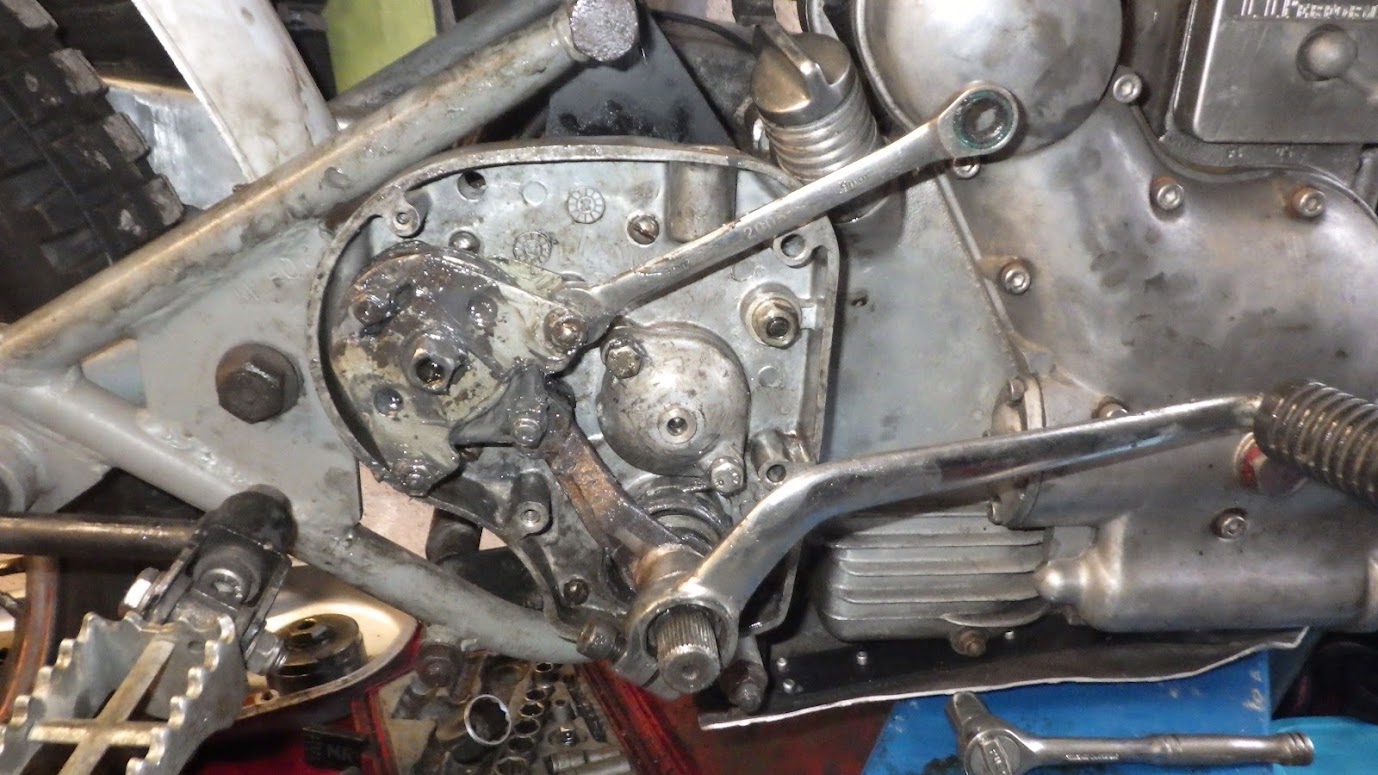 The main difference between mineral oil, semi-synthetic and synthetic is the more synthetic componants it contains, the longer it will last before needing to be changed. The viscosity is as stated on the bottle.

In terms of a pre-unit bullet, any 20w-50 oil should be perfectly fine and will be of a quality that exceeds what was available when they were designed. Using a car oil with lots of anti-friction additives and detergents is absolutely fine in the engine too (and possibly desireable given the amount of carbon they produce). Friction modifiers could potentially cause issues with clutch slip if you use it in the primary chaincase. Many owners (and hitchcocks) use ATF in the primary drive anyway.

If the bike has only done 4,800 miles it should be pretty clean inside so using a part synthetic or synthetic 20w/50 would also be OK. The only snag with changing from mineral to synthetic is that the latter types are more "detergent" so they will wash off deposits left behind by mineral types; obviously this might cause issues if debris blocked an oilway. For example, I once had a problem with a used car engine I fitted to a trials car, where the previous owner had neglected oil changes. I used a part synthetic oil and after a couple of thousand miles a piece of debris found its way into the oil pressure relief valve in the pump, jamming it shut and causing a massive overpressure on start up that lifted the oil filter canister off the side of the engine.

Another thing to bear in mind is that the recommended oil change intervals are really quite short on these bikes so most might consider it a waste using a more exotic oil. I use a classic car mineral oil with an API rating, nothing more. The engine gets revved higher than most Bullets do and so far it's been more than adequate.

I have done a full service using 20/50 for engine, sae 20 for primary case and sae 50 for gearbox unfortunately didn't have a new oil filter so will see how she runs now and do a proper full service in May / June. Interestingly on releasing drain plug started off with clear water dripping from plug - guess side effect from Ethanol ?

I wouldn't expect ethanol fuel to cause water to appear inside the engine. Inside the tank or carburettor maybe.

For it to be in the engine, I'd suspect condensation or rainwater ingress.

By Wheaters -  Wed Jan 26, 2022 12:02 am
-  Wed Jan 26, 2022 12:02 am #99823
Mine dribbled out some water when I first bought it. It’s most likely to be condensation coupled with a partly blocked breather system. These engines seem to suffer a lot from cold running. The only answer is to keep the breathers clear, ride hard to get the engine nice and hot and change the oil and filter on a regular basis.

By Duke of Wybourne. -  Wed Jan 26, 2022 4:35 pm
-  Wed Jan 26, 2022 4:35 pm #99827
Asda 20/50 in the motor, ATF in the primary drive, and HGV 00 (steering) auto grease in the box. Took a risk with that one, but I bought a barrel of the stuff for £5 at an auction so I thought I'd better try it. Never any leaks or issues. As mentioned, the usual emulsified gunge would appear around the oil filler/dipstick, but I ignored that. Seen plenty of it on o!d Bedford truck engines without any catastrophes. When you consider what gets put in these bikes in their country of origin, anything out of a budget Supermarket shelf here will be like a glass of finest Scotch single malt.

Never heard of blip changing but I assume it means raising the engine speed just before dropping into lower gear which I have been doing for well over fifty years of motorcycling.