The engine ran fine for about 2500 miles. I upped the compression by removing one of the compression plates. Shortly after, it suffered a seizure (which freed off and ran for another 600 miles). The jury is still out as to if this was the cause or effect of a split/crack in the piston through the gudgeon pin hole but I'm erring on the side of effect. it's been rebuilt again at a lower compression.

I've been having an ongoing problem with noise under load which I took to be pinking. I have also had several bent pushrods. It's a clattering/mechanuical noise and only happens when the engine is warmed up and under load at moderate revs. I have fiddled with the timing and carburettion ad nauseum to no effect.

I've been trying Bullet Whisperers trick of advancing the inlet timing and I thought I'd try it back to standard to see if it made a difference. Now, this is the first time I've been in there with the engine still fairly hot, which may or may not be relevant.

When I rotated the inlet cam and slid it back in, I noticed I didn't have to lift the follower to slide it home. On further inspection, the folower is hitting the crankcase "stop" before it touches the cam. There is a gap I can get a feeler gauge in. At the "fully closed" position, there is a 0.004" gap between the cam and the follower with the follower resting on the crankcase casting! 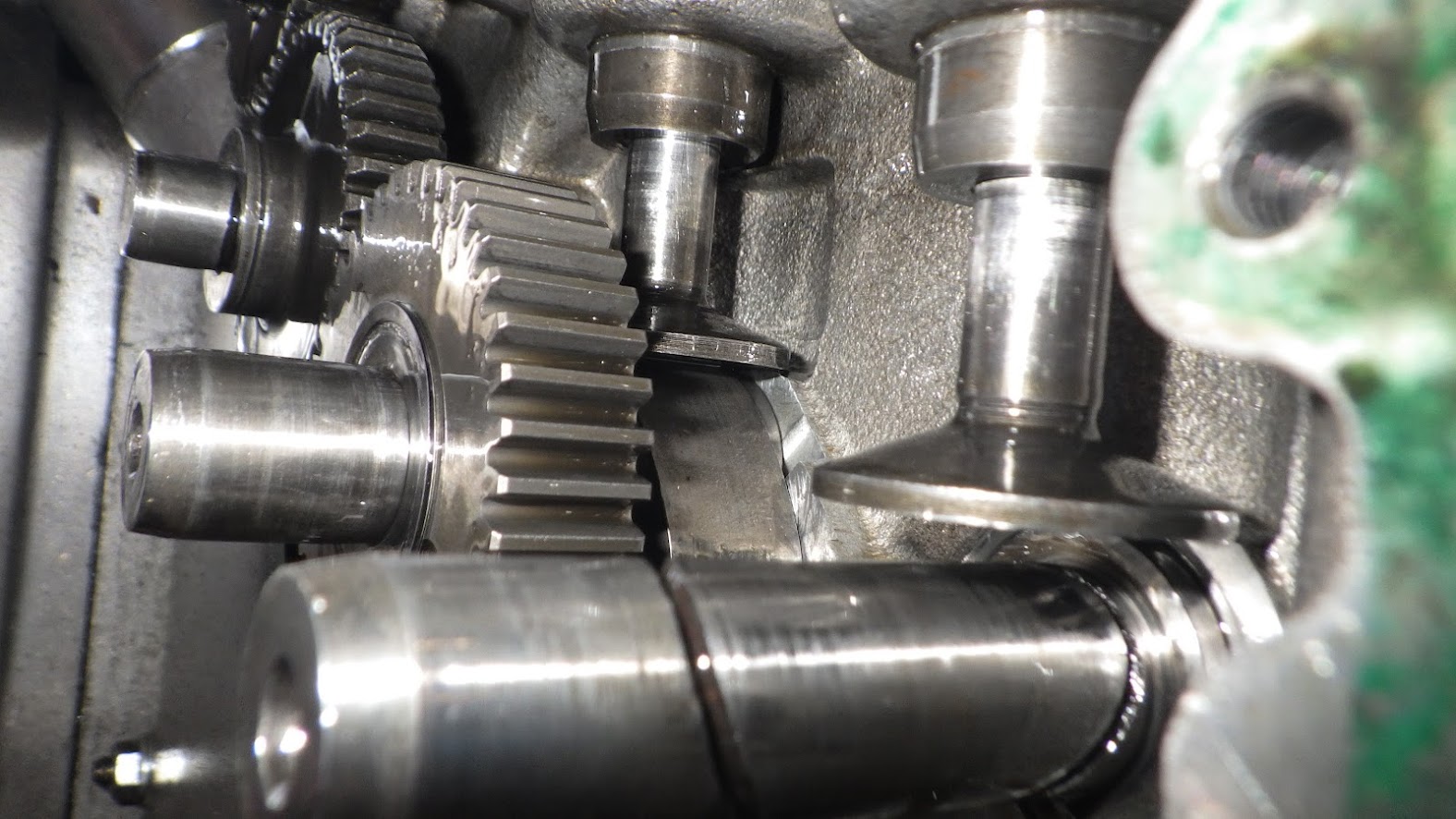 There is no perceptable play between the cam and the spindle. The cam itself doesn't look particularly worn or damaged. But even if the cam was wearing, it can't possibly continue to wear beyond the point where the follower is in contact with it? The followers are free to move and do not appear "wobbly" when rotated.

That's not the only issueI When I removed the exhaust cam to get a better look, the spindle came out with it! It's finger tight. The inlet one is stubbornly not. 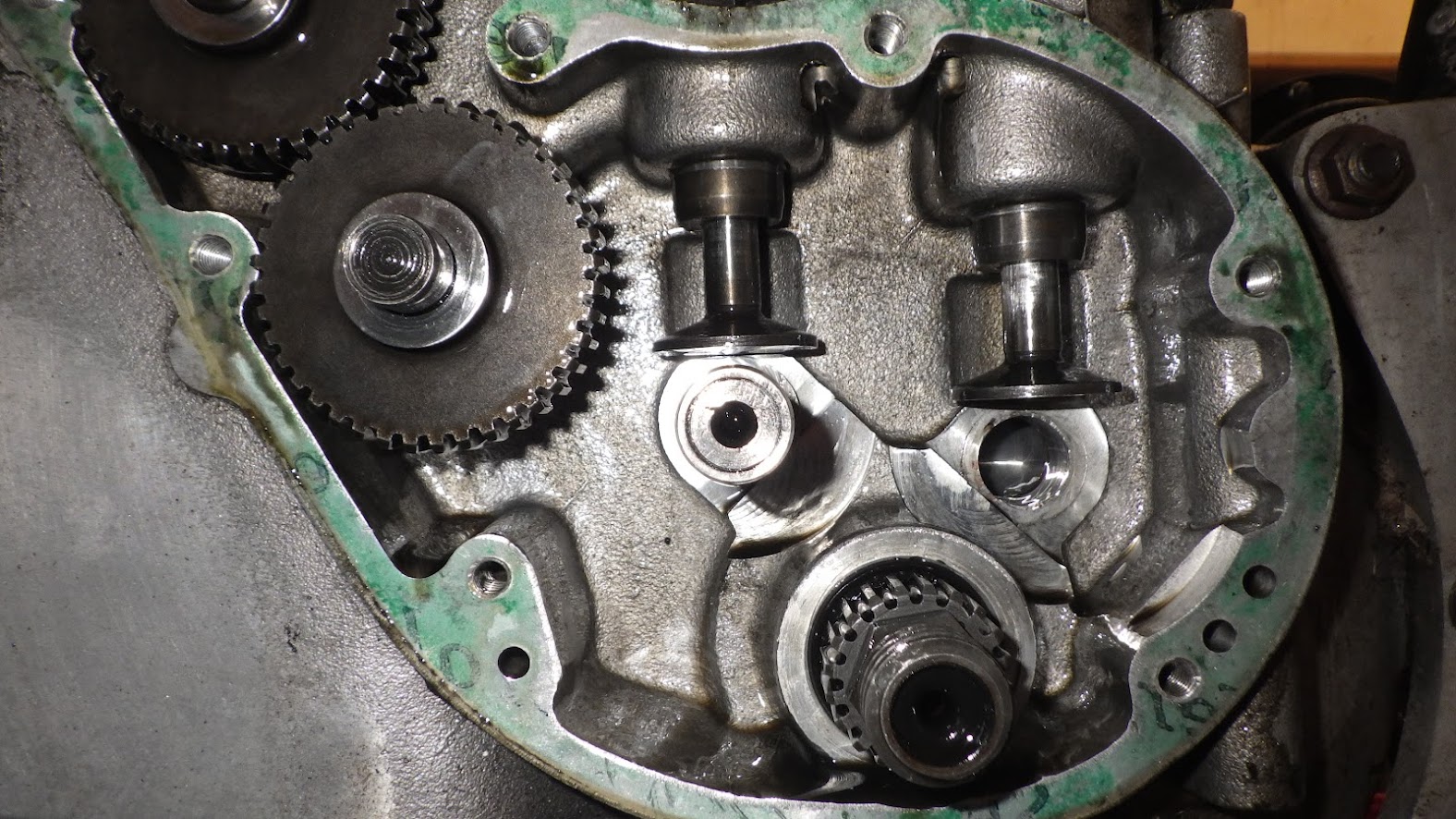 So. I'm pretty sure I've identified the source of the noise. Also probably the reason for bent inlet pushrods because they aren't in touch with the cam all the time.

Raises some questions. The first is what's going on with the inlet cam? Could the spindle be bent? It looks slightly rotated on its seat now (pic below, the flat is misaligned) and it definately wasn't when it was assembled because I checked my build pictures. So is the spindle itself slightly eccentric? Or is it walking out of its seat and angled marginally down? Or has the casing deformed? I was thinking about simply replacing the spindle in the first instance but there are no standard ones in stock. Or am I going to have to burr down the crankcase "shelf" where the follower comes to rest? 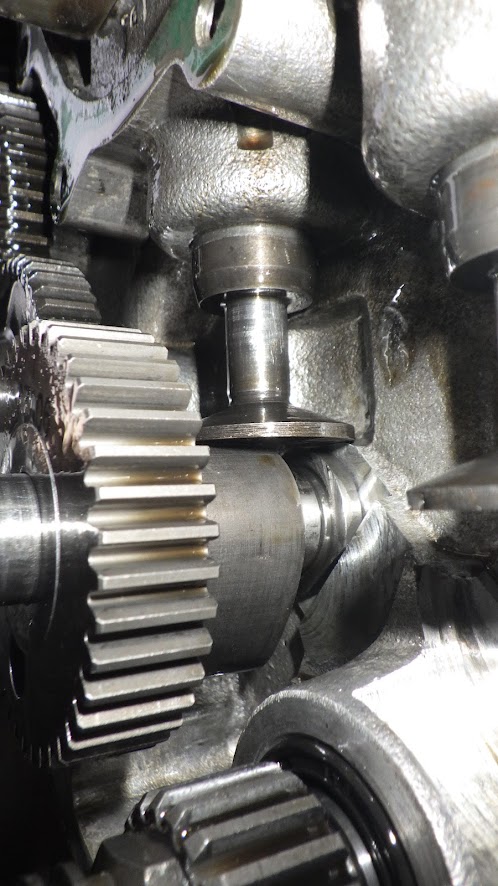 Second, what about the exhaust spindle? It'll need replacing. Does anyone know the diameter of the standard spindles where they fit into the casing? My current one is finger tight but without any appreciable play. I miced it up as 15.87mm (0.6248"). If they are the same as electras, those are 15.90-15.93 standard fitting which would make my spindle under diameter.

Are eccentric/adjustable cam spindles worth bothering with or just something else to go wrong? There is moderate backlash on the cams with the standard ones. That may be a moot point because I'm guessing I'll need an oversize spindle (or to fit it with green fitting compound).

Also any tips for removing the spindle. Our hosts are out of stock of pulling tools, can something else do the job? May need to fabricate something?

I'd imagine adjustable ones might be able to give me more "lift" on the cam relative to the crankcase because they will have an up and a down side 180 degrees apart?

If that IS the case (tbh difficult to confirm from a photo), I reckon it could be repaired by milling it out to a larger diameter and letting in a brass bush.

Wheaters wrote: ↑
Tue Jan 11, 2022 7:33 pm
From the photo it looks like the aperture where the exhaust cam shaft spindle runs is burred and worn out of round.

If that IS the case (tbh difficult to confirm from a photo), I reckon it could be repaired by milling it out to a larger diameter and letting in a brass bush.

There is a small burred area on the outside edge of the hole at about the 6 o clock position but no corresponding one at the 12 o' clock on the inside which I'd expect if it was damage due to rocking. I think it has come from a previous owner (or the factory?) fitting the spindle. The rest seems in good order. I think a lot of the odd appearance is the flash reflecting off oil in the hole

By Bullet Whisperer -  Tue Jan 11, 2022 9:33 pm
-  Tue Jan 11, 2022 9:33 pm #99673
I never advance inlet cam timings, only retard them. It sounds like the base circle of your camshaft is a touch too small, but as you suggest, you could lower the 'shelf' as you call it. I try to avoid using eccentric spindles, they can give trouble sometimes. I once had the crankcase ends of some cam spindles metal sprayed a few thou oversize, to overcome a loose fit in the crankcase.

Sorry, yes. I followed the instructions in your video.

My main concern is why there's now a gap between the inlet cam and the follower. There wasn't when I built the motor.

Good call, anything is possible because it started life as a basket case but I just checked and the spindles and holes match.

I've ordered a spare standard spindle and two first oversize ones In case the inlet one is sitting cock-eyed in its hole. Also a paralell 15.9mm reamer (oversize spindles are 15.95mm).

I've also ordered a 15mm split collar clamp which I can clamp round the old spindle and get a slide-hammer on it.

I'm considering using green bearing fit to ensure they definately stay put, you'd be using heat to extract them anyway. Thoughts on this?

Also pretty sure our hosts have screw-out extractors for cam and idle pinion spindles, slide-hammers seem a bit extreme.

Heating up the surrounding alloy for removal, definitely.