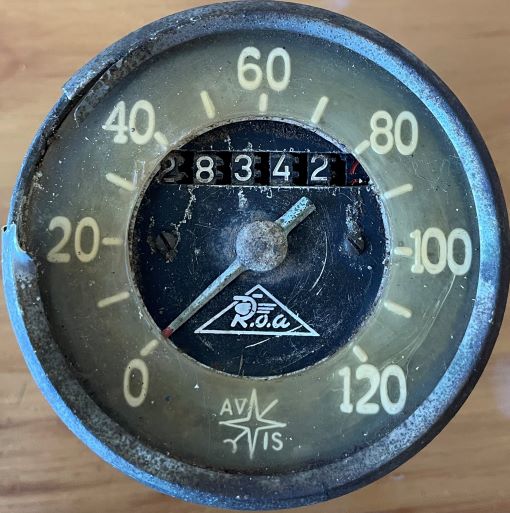 Unfortunately, when it comes to the gearbox, I´ve fallen at the first hurdle. From what I´ve read in Motor Cycle & Cycle Trader´s Servicing Data Sheet No. 4 and referring to the exploded diagram (Parts System | EXG074 (villiers.info) the “Bush operating shaft outer” (9) should just slide off the operator shaft (20). But its stuck solid. No amount of pulling, heating or WD-40 has shifted it a mm. 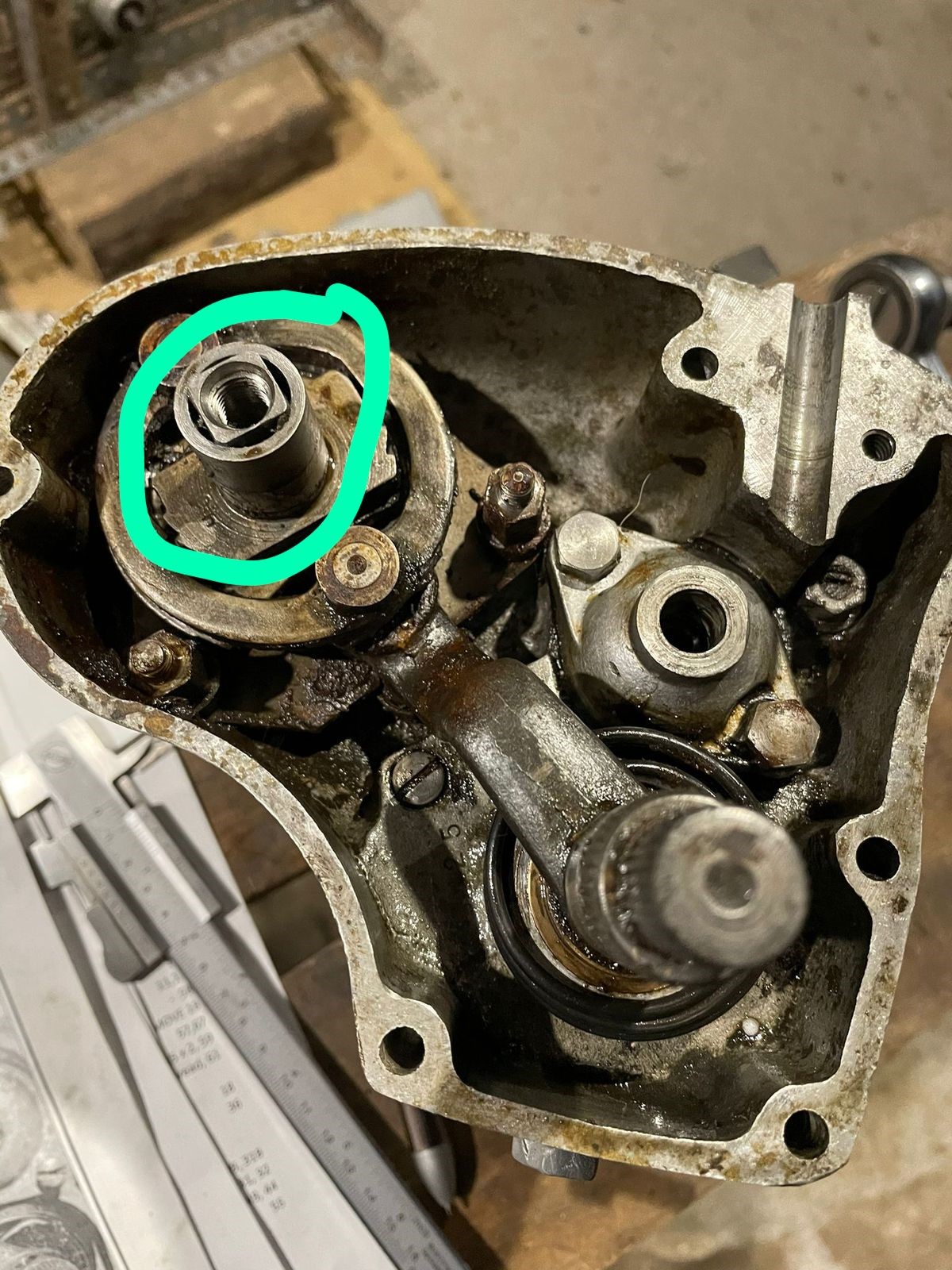 Everything else looks the same in that area so yes, I'd expect that spacer to pull off, the square shaft is literally a plain square shaft. You'd be able to pull the whole ratchet assembly off an Indian 4-speed from the point you are at.

If that picture is from after you've tried, we have very different definitions of what "heat" is because I don't consider steel hot in terms of removing stuck parts until the lube is smoking off it.

Try a proper penetrating fluid? WD40 is not one. Something like plusgas or a home-brew mix like 50:50 paraffin and ATF.

Here's a thought if you're still stuck. Check the sensibleness or otherwise of this for yourself before attempting it.

The bit on the inside of that square operator shaft is a piece of folded steel that slots over the end of the gear operator. 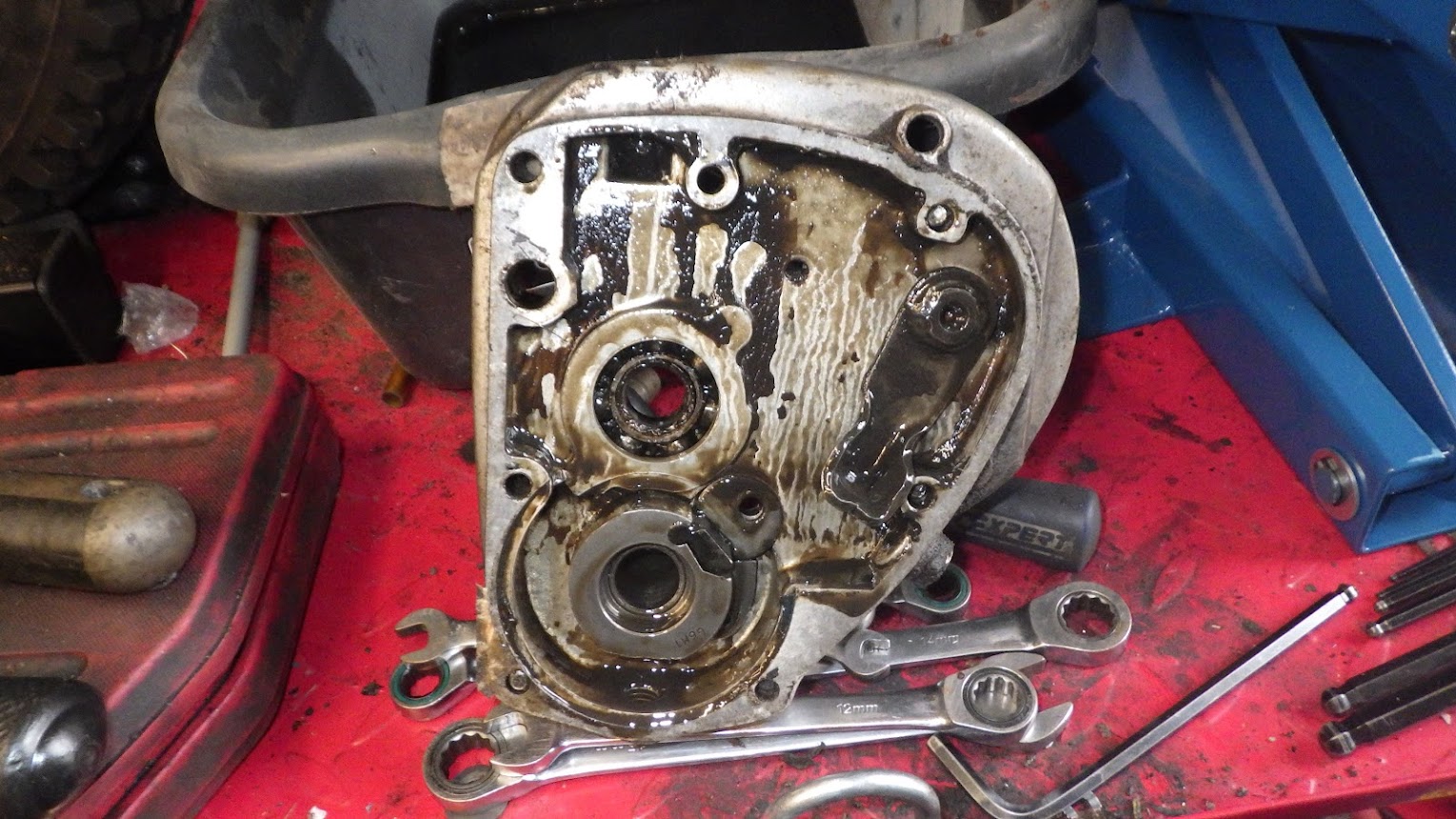 If you were to remove the gear operator pin and bush from the back of the gearbox, the gear operator would be free to move about much more inside the gearbox. You could probably then drift the square operator shaft a good few mm back into the gearbox which would give you some movement on that bush and if nothing else, create a gap to pry in or get the tip of a puller into. 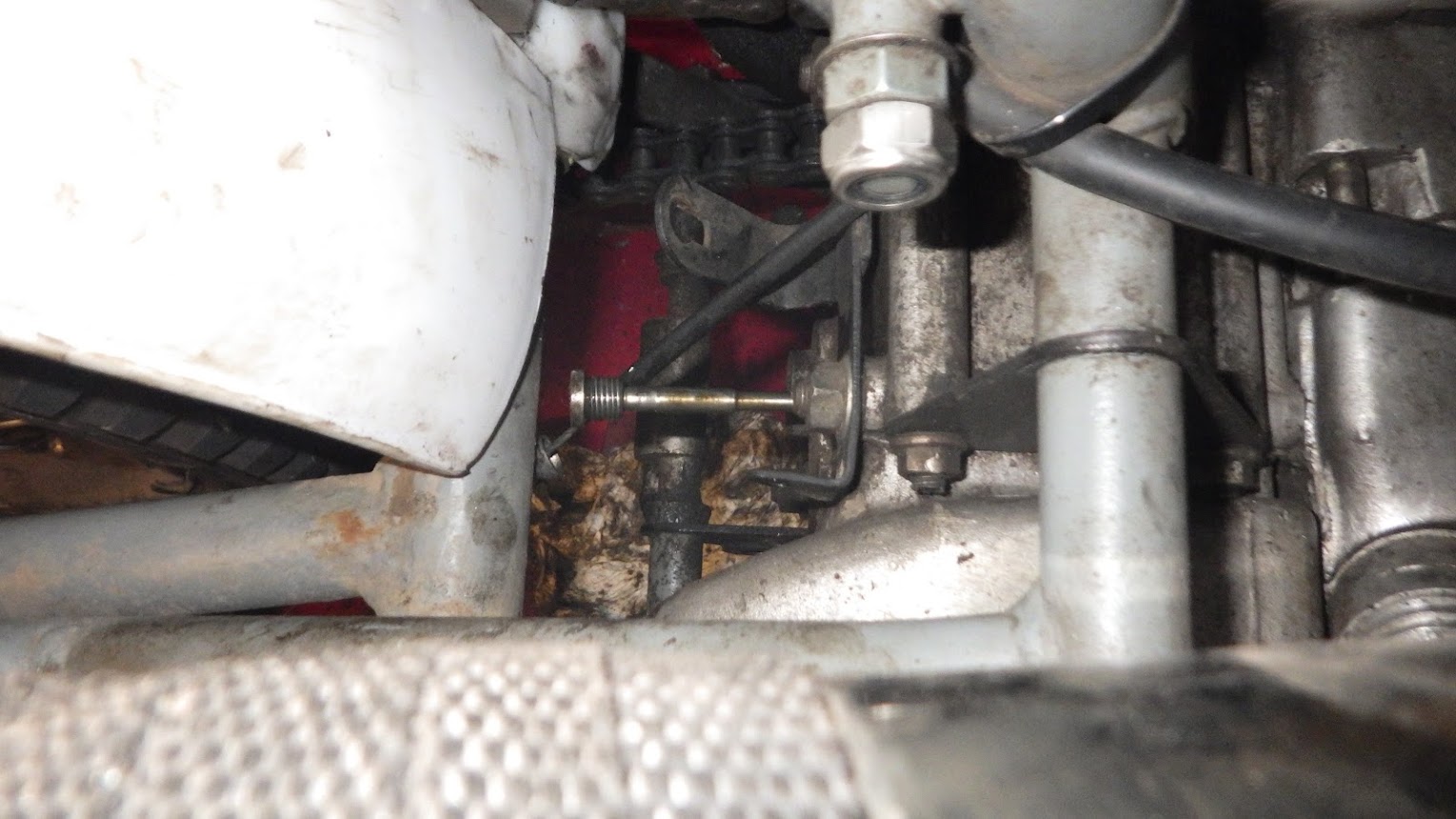 Just be aware, once you remove that gear operator pin, you are comitted to splitting the gearbox, no way you'll get it back in again from the outside.

Did you see my recent post with loads of pictures of me stripping my Indian 4-speed box? viewtopic.php?f=3&t=12432

By jack clegg -  Sat Jan 08, 2022 12:01 pm
-  Sat Jan 08, 2022 12:01 pm #99619
Good old Albion-Villiers 4 speed. A top box for it's time.
Screw the gear pointer bolt back into the squared shaft (leaving room for movement) and try drifting the shaft out by hitting the bolt head. That bush can be a tight fit, but you never know what a previous owner has done (burred shaft, glue, got knows what sometimes). If that don't shift it, cut down the side of the bush and it will release its grip(a small dremel disc cutter would be best). All these parts are available so no problem replacing sawn off tat. A small cut into the squared ratchet, which may be necessary to fully cut the bush off, will not hurt it. However if you cut from the outside edge inwards towards the ratchet, you may find it will release before a full cut is made. The cutter should not touch the squared shaft, as there is plenty of room between them. Personally, I think drifting with the gear pointer bolt will shift it.

AH, I was misled by the above photos. Thought the cover was off. You may still try drifting, but it can't move it far at all. Cut the bugger off.

By jack clegg -  Sat Jan 08, 2022 12:16 pm
-  Sat Jan 08, 2022 12:16 pm #99620
Just one other thing. Do not disturb/remove the two pillar bolts which secure the rear slotted adjuster plate. These can be left in situ when dismantling the box & will preserve the correct gear indexing on reassembly (presuming it selected gears correctly beforehand). This also applies to RE boxes.

jack clegg wrote: ↑
Sat Jan 08, 2022 12:16 pm
Just one other thing. Do not disturb/remove the two pillar bolts which secure the rear slotted adjuster plate. These can be left in situ when dismantling the box & will preserve the correct gear indexing on reassembly (presuming it selected gears correctly beforehand). This also applies to RE boxes.

Also don't remove the cheese-head screw next to the number 5 located at a 10 o' clock position to the kickstart shaft. It holds the kickstart pawl stop on and can be a real sod to get back on in the right place.

@Stinkwheel - Yes, saw your YouTube Vid, very useful - thanks for that. Is Plusgas that good? I´ve not come across it before. If you recommend it I´ll invest in a can.

I like your gear operator pin suggestion, but my 4-speed the gear opperator has two seperate pins according to the diagram. Not sure if I can remove them from both the outside of the box (its not clear from the exploded diagram and the box is in the in-laws garage) but I´ll certainly try it if I can.

@Jack Clegg/Vince. If I can´t drift it back, I agree, cutting it off isn´t a bad idea, after all its just a bit of brass tube, I can easily make up another on the lathe. Thanks for the heads-up on the two piller bolts and the cheese-head screw. I´ll let you know how I get on after the weekend.

As I say, I preferr a "home brew" penetrant. A mix of 50:50 acetone and ATF seems to get sucked into the tiniest of gaps BUT it will dissolve any plastic or rubber it comes into contact with. Substituting paraffin for the acetone also works well.

One of the operator pins is seized in pretty solid. The other came out with the impact driver, but this did't give me any slack in the operator to drive the square shaft back. So I scratched that idea.

Before resorting to cutting it off with the dremel, I inserted the tip of a woodwork chisel into the join between the bush and the male control rachet, and gave it a tap, and bingo, movement! After I had a gap big enought to get the tip of a screwdriver in, I was able to lever it up enough to the the bearing puller legs under. The male control ratchet was similarly siezed, but I was able to get the screwdriver tip in straight away without needing the chisel, and noted that the shape of the bearing puller feet is a miniture crow bar, which was useful as there is no space to use it as intended...

I ran out of time at the "main shaft nut" stage, but apart from the siezed operator pin which I hope will come with heating the case, i'm not expecting any further trouble. Thanks all again for the useful suggestions and moral support!