last night, shortly after setting off from home for a ride, my bike cut out, while I was shifting gears, nothing major to note (i'm still getting the idle dialled in and it hadn't really warmed up yet) so I pulled over to try to restart it.

But the kick starter felt locked solid! I pulled the primary cover to see if it was clutch related, and all that looked fine. But putting a wrench on the crank confirmed it was that that was "seized" up. But not totally, it wiggled a little, and then I got it moving and freed up. all with very little force and no crazy noises. and then got it re-started.

Now, it turns out my oil level was pretty low. The breather has been blowing more out than i'd have liked. But it hadn't run dry.

So, what do folks think my next step should be? (Oil change? Head off? Full rebuild?) What is most likely to caused this (top end? Bottom end?) I've never encountered and engine "seizing" like that and then busting loose and running again? I'd rather not pull the motor apart, but I also don't want to ignore something that might be a warning sign of bigger problems.

Any thoughts appreciated,
Thanks,
Chris

You may have got off lucky, I would be inclined to drain whatever oil you have left and see if there are any metal particles in it, if there is then you may have damaged something.

If oil looks good you may have been lucky - either way you need to find out why the oil is coming from the breather.

Just my thoughts.
Previous bikes - far too many !!

The partial overheating had caused high spots on the piston, with careful filing I was able to ease these down enough to restore running clearance and all was fine.

I would at least recommend a top-end strip and see what sort of condition the piston is in. Stock 500 pistons are a known weak spot on the Indian-built iron barrel 500, the piston crowns have a habit of breaking loose, so an upgrade to something more robust might save another tear-down later on.

By vince -  Wed Oct 09, 2019 12:32 pm
-  Wed Oct 09, 2019 12:32 pm #85947
Hi, did you pull the clutch in when turning the crank? Did the kickstart move with the clutch disengaged? The reason I ask is that the engine may not be the culprit, the wriggle may have just been the slop in the primary chain and the gearbox was tight. You said it happened as you changed gear. Piston seizures normal free off by themselves. Did the backwheel lock up or the engine stop suddenly? Vince

How long has the piston been in there for and is it a standard one? The pre-unit indian 500 bullets (and to a lesser extent the 350s) are known for piston crowns collapsing after they have a few miles on them, especially if ridden hard. Pinches the piston rings ring which leads to increased burning of oil and blowpast/breathing (check) and eventually a seizure (check) and occasionally a catastrophic piston failure...

That might have been your warning. If it has a standard piston with a good few miles on, I'd be wanting to have a look at it.

I thought I’d just over filled the oil a bit and was expecting it to blow until it ‘settled’ to a level it liked. Maybe not. I had only been riding barely 5 minutes when it happened so probably not even full ‘hot’ yet. But I guess it was starving for oil, bad things can happen quick.
So mostly likely/consensus, pull the head off and check piston/barrel/rings for damage? More likely up top than bottom end?
Thanks again guys.
I’ve just spent a year doing everything to this bike Cept the motor (cause it was supposed to be almost as new) so I’m trying not to get bummed out by this. But talking it through helps keep me from totally freaking out.
Thanks,
Chris

Here's a picture of a 500 bullet crankcase half showing the oil tank. You can see the dipstick in position. The oil pickup is a tunnel at the far bottom left of the oil tank below where the stud is. If the oil hasn't yet overheated, providing the level is up to the level of that stud while the engine is running, the bike won't notice. 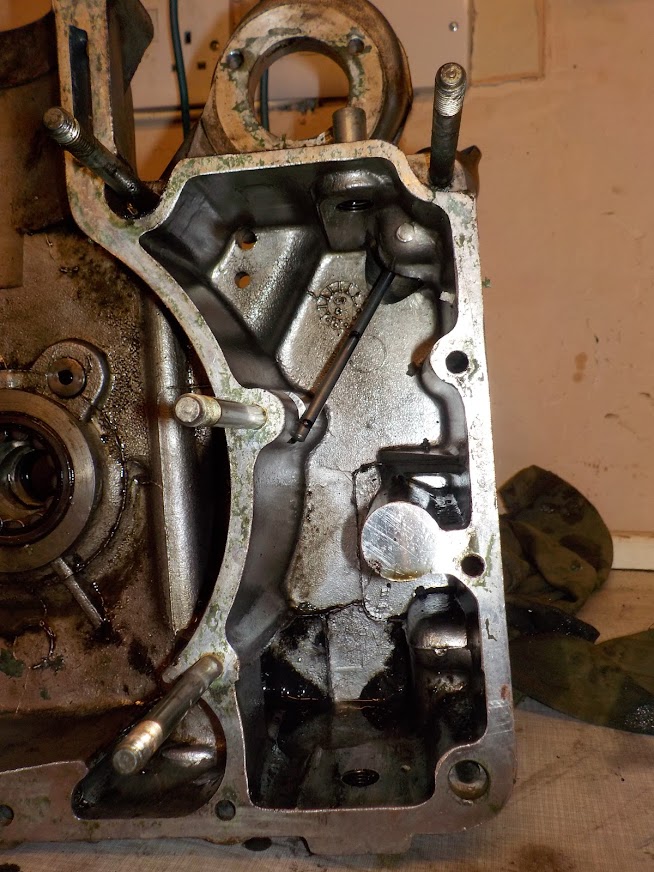 When people have engine seizures due to oil starvation on bullets, it's invariably a failure of the oil pump drive or a blocked oilway.

If you want peace of mind in that respect (I get paranoid, especially if my 612cc bullet kicks-back when I start it), loosen one of the rocker feed banjo bolts then either start the engine or hold in the decompressor and kick it over a few times. Oil should seep out round the loosened bolt. If that's happening, oil is getting to the crank and has been picked up by the scavenge pump.

But I guess there is a chance I've had an oil pump/oil way issues.

Should I try to verify that before tearing the head off?

Is there any scenario y’all can think of that the motor doesn’t need to come apart? I’m feeling like “no”

By TexasChris -  Wed Oct 09, 2019 7:31 pm
-  Wed Oct 09, 2019 7:31 pm #85958
Unless... if I verify oil is still circulating, then oil starvation is very unlikely, so there’d be no reason to think a relatively new motor, that wasn’t very warm would have a piston seize?
Maybe what Vince mentioned earlier is a possibly? I think it cut out mid-shift, while I had the clutch in. I downshifted while rolling and tried to bump start it, but the wheel just skidded. When I stopped, the kick starter would move freely when the clutch was pulled in.
Mmmmm????